What are you looking for?

Wow first thing I have to say is how proud I am to have been involved in the Victorian Mounted Games squads and knowing all these great pony club riders. What a great achievement by TeamVic.  This year the event was hosted by Pony Club New South Wales and held in Canberra.

The first day of the event saw the seniors saddle up to compete.  The poor seniors rode in shocking conditions (as you can see by the water on the sand arena team photos).  Soaked to the skin they competed in 20 games, and every rider would have ridden nearly all the horses at some stage.  The horses were generously provided by Pony Club NSW.

Riders have minimal time to familiarize themselves with their pool of horses. Riders never saw the horses until that first day and coaches had to quickly try and work out the horses and which rider suited which horse best. Whilst competing, the riders had to work out how the horse went and what it didn’t like to do. Tough job in for any rider! It’s quite a test of horsemanship and riding skills to perform at the elite level on an unfamiliar mount.

The competition was tough with some brilliant riding from all states except for Queensland who were unfortunately not able to send a team. The riders met some old friends and made new ones from all over Australia. This is what Pony Club is about great competition, sportsmanship and making new friends.

My passion is Mounted Games. My own son went through the pony club squads, coached and is now President of the Mounted Games Association, which for your general knowledge grew from the Prince Philip Movement in England. This association provides regular competitions generally twice a month and all the squad riders follow the PPMG calendar because without competition they can never improve their skills.

Pony Club Victoria squads work hand in hand together with MGA to grow the discipline of mounted games. This discipline it exciting and dynamic.  The horses train a lot in flat work and riders use every technique you might teach in a flat or show jumping lesson. The diﬀerence is the equipment and that you are racing side by side generally 4 or 5 riders.

The squads start in February each year and generally are scheduled on the first or second weekend.  Dates are advertised on social media and/or PCV website. The squad clinics are open to anyone interested.  We encourage new riders to come and have a try to see if games squads will be something for you.

Games squad training moves around the state to diﬀerent clubs. Any pony club who would like to volunteer their grounds for a squad clinic is encouraged to email Jodie71@internode.on.net

Through years of fundraising, a tandem box trailer with 5 lanes of up to date (same as used internationally) equipment can be brought to all the training clinics so clubs do not need to supply any equipment.

I hear that games don’t get played or taught at many clubs which is a shame. It builds confidence, the ability to ride one handed, carry equipment and lean oﬀ the side of the horse and get back in the saddle. Balance, confidence, hand to eye coordination. All things that make a good well-rounded rider.

So why not come and join the squads and try out the discipline of games! 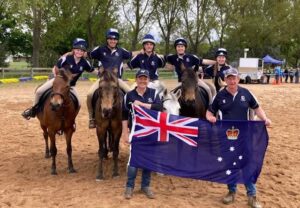 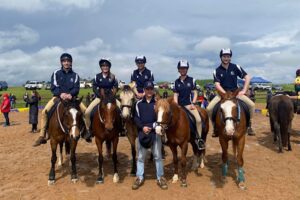 Some of our clubs are getting into the Christmas spirit! Scroll down to see Balnarring PC and Myrtleford PC's Christmas rally fun. If you want to share pictures of your [...]

Heat Health With a warm weekend forecast ahead for most of us this weekend, the Victoria Government has announced they are making some changes to their heat health alerts this [...]